Live the experience of playing in the best community! With Xbox Live Gold, you're in for incredible multiplayer matches in co-op mode. Make friends, unlock achievements and raise your fun to the highest level!

With multiplayer you can do it all!

All the advantages of being Gold: 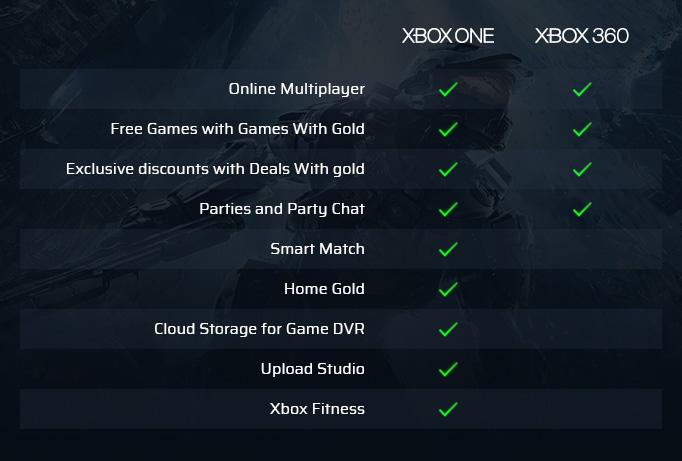 * Games and media content sold separately. Additional signatures and / or requirements apply for some features. Online Multiplayer mode between Xbox One and Xbox 360 is not supported. For features requiring Gold, see xbox.com/goldfeatures. Free Game Offer: Only for paying Gold subscribers. An active Gold subscription is required to redeem Xbox One games. Kinect and / or hard disk are required for some games. Some restrictions apply. See on xbox.com/live. THE CODE OF THIS CARD ONLY IS VALID AND MAY BE USED IN THE BRAZILIAN TERRITORY. System requirements: Xbox 360 (requires 256 MB or more of storage) or Xbox One. Requires a Microsoft account and broadband Internet (ISP fees apply). Some broadband services may not work and performance may vary. Online multiplayer is a feature that is not available in every game. Not all Xbox 360 features of Xbox 360, including some applications, are available on Xbox One. Updates, services, and other downloads may require storage, hardware, Internet speed, and / or additional fees. System features and requirements vary by device, country, and may change without notice. Not available in all countries, see xbox.com/live/countries. Subject to the Microsoft Services Agreement at microsoft.com/msa. © / ™ / ® 2016 Microsoft. *** Xbox Fitness: The Xbox Fitness Pass gives you unlimited free access with your Xbox Live Gold subscription until December 2014 on Xbox One. Some Xbox Fitness content is not available via Fitness Pass. Some programs are accessible to all Xbox One users since their purchase.

*1. The games are sold separately. The Xbox One Backwards Compatibility feature only works with pre-selected Xbox 360 games. Visit: http://www.xbox.com/backcompat. You must have Xbox Live and broadband internet access for the initial download of the game on the console.

*2. Online multiplayer requires Xbox Live Gold (sold separately). The amount of games available in 2016 compatible with different devices is limited. Soon more games will be released. It is necessary to have an active Gold subscription to enjoy the free games.

* 4. The Xbox One Backwards Compatibility feature only works with pre-selected Xbox 360 games. Visit: http://www.xbox.com/backcompat. You must have Xbox Live and broadband internet access for the initial download of the game on the console. The transmission happens on one device at a time, to transmit the multiplayer mode.

* 5. It requires advanced TV hardware and broadband internet. Charges are applied according to your internet service provider. 4k transmission is available in certain applications. Some applications require specific signatures and / or additional requirements.