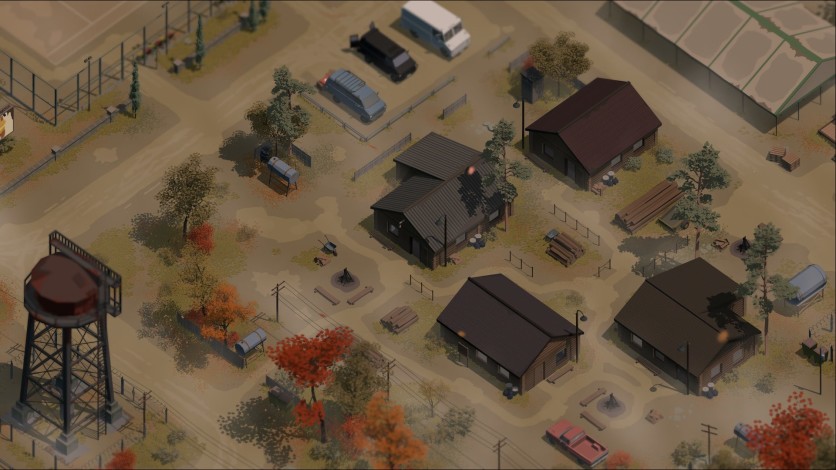 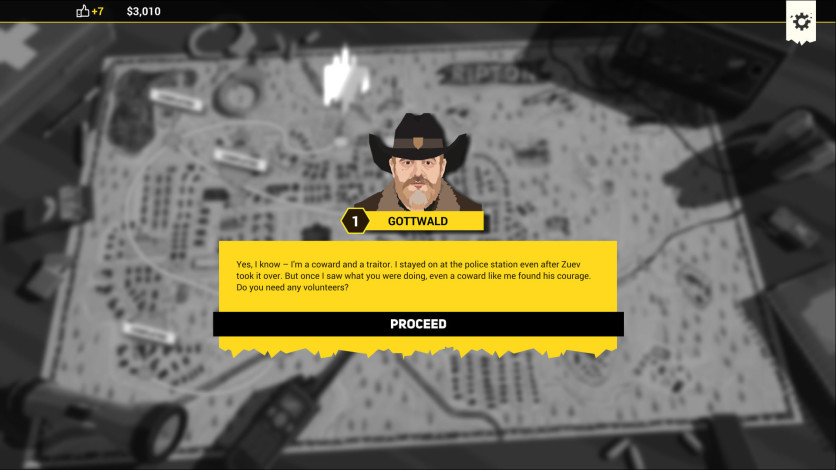 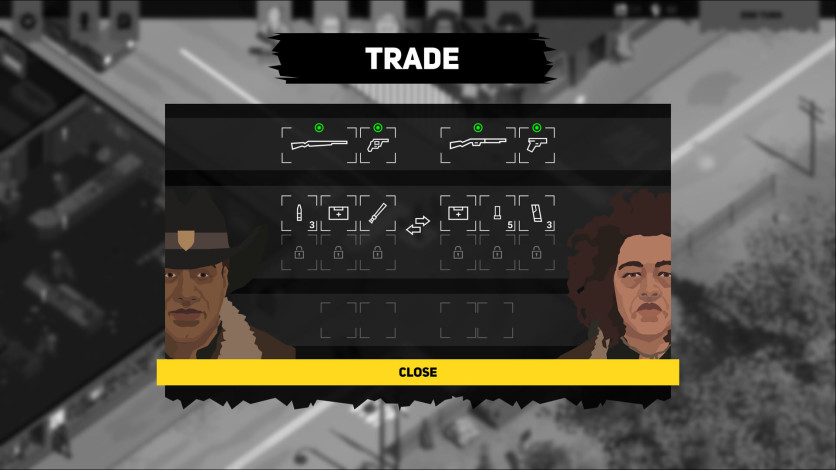 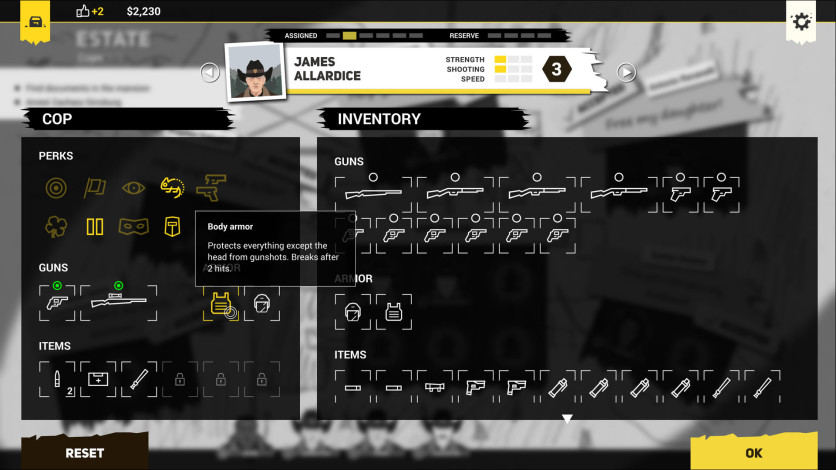 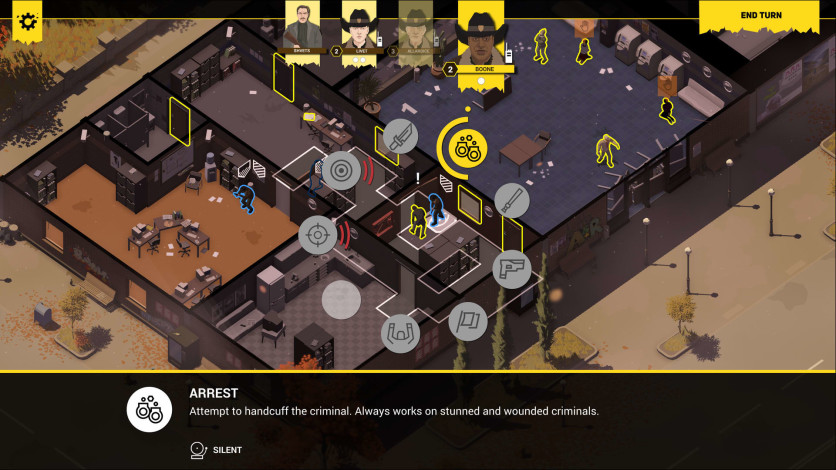 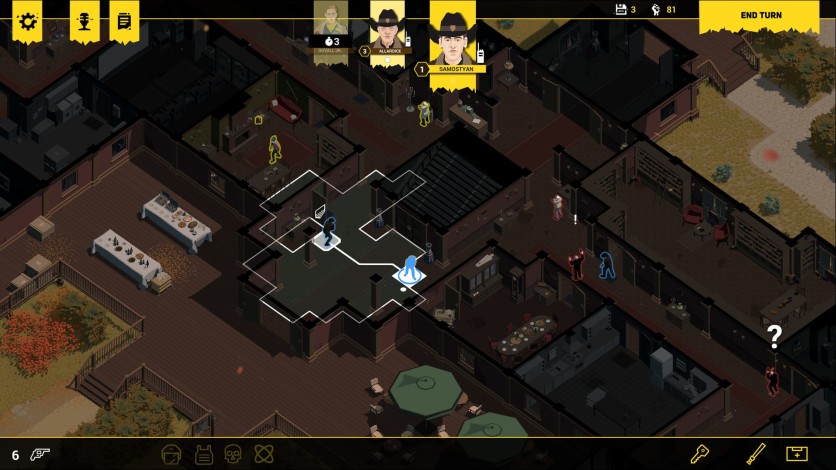 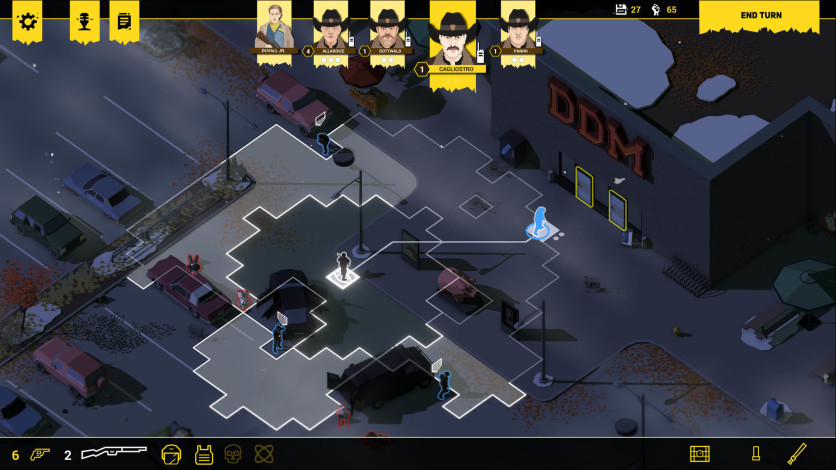 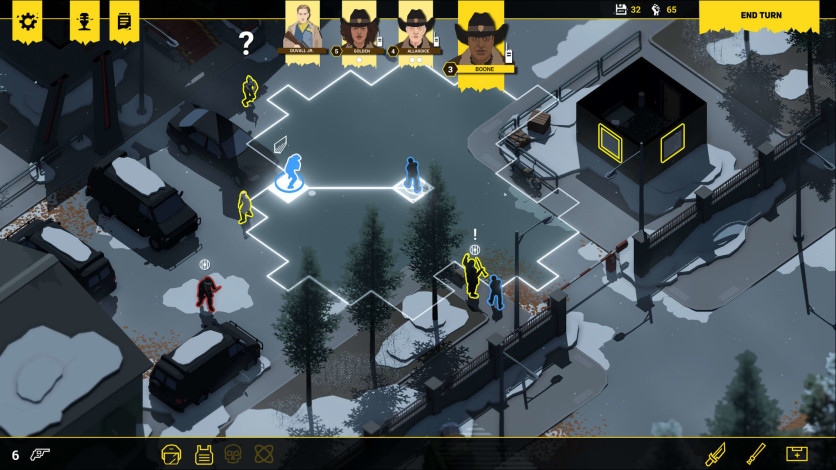 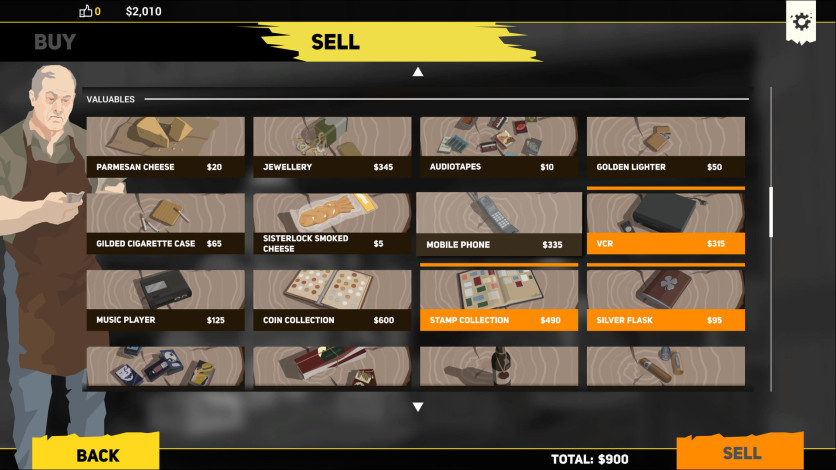 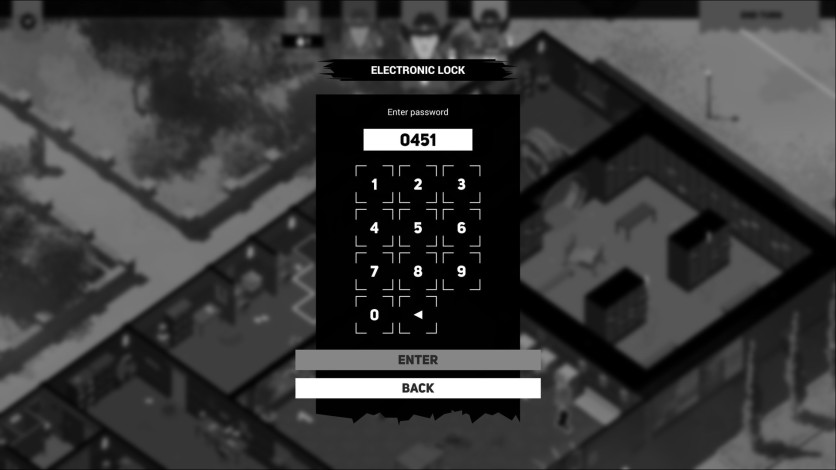 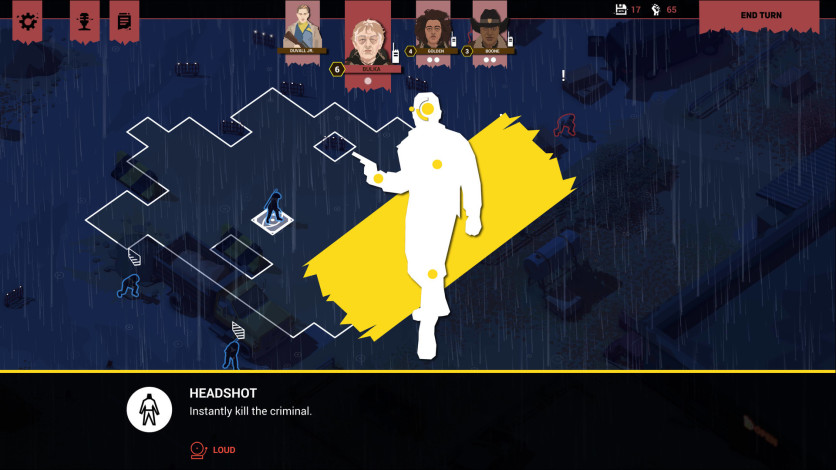 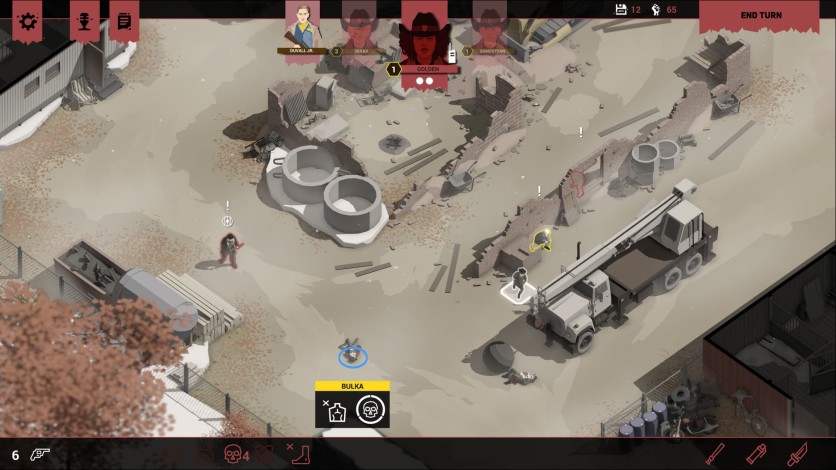 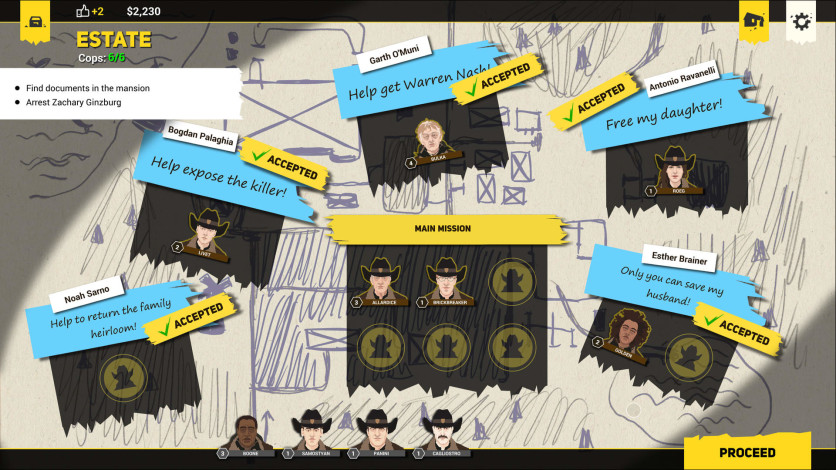 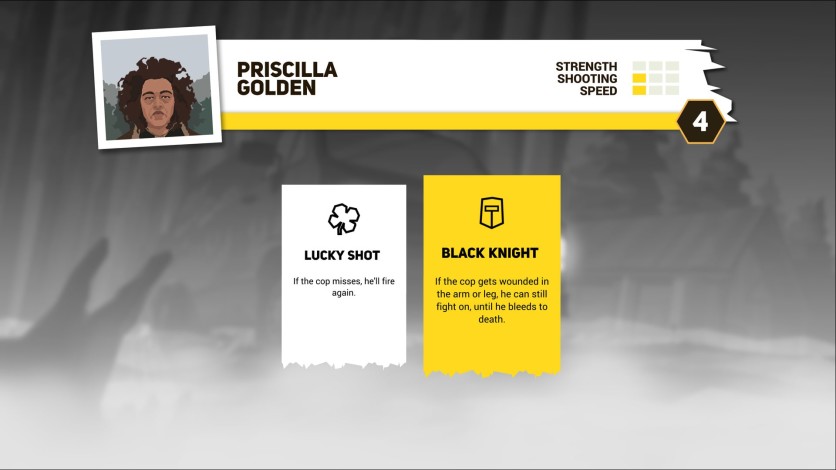 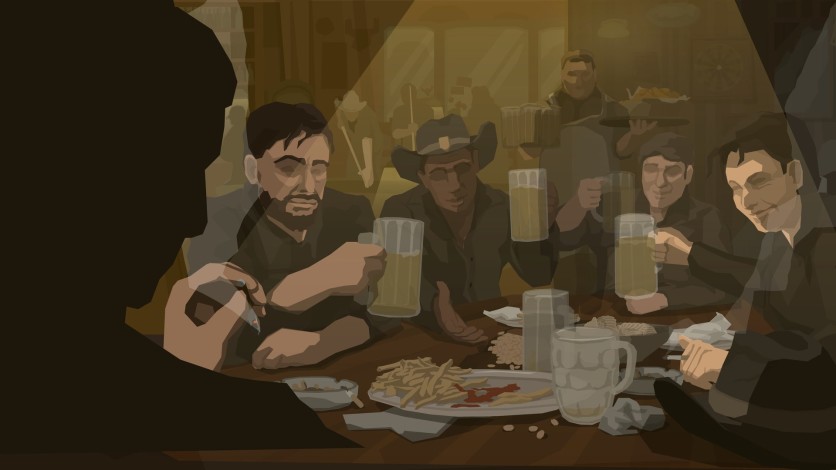 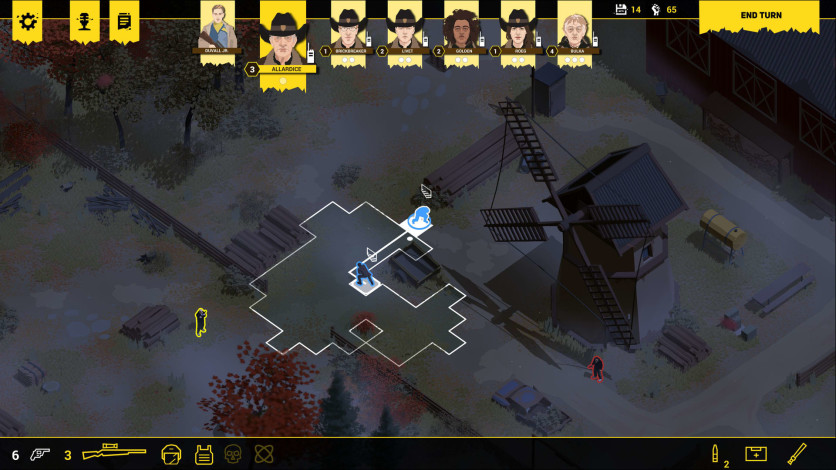 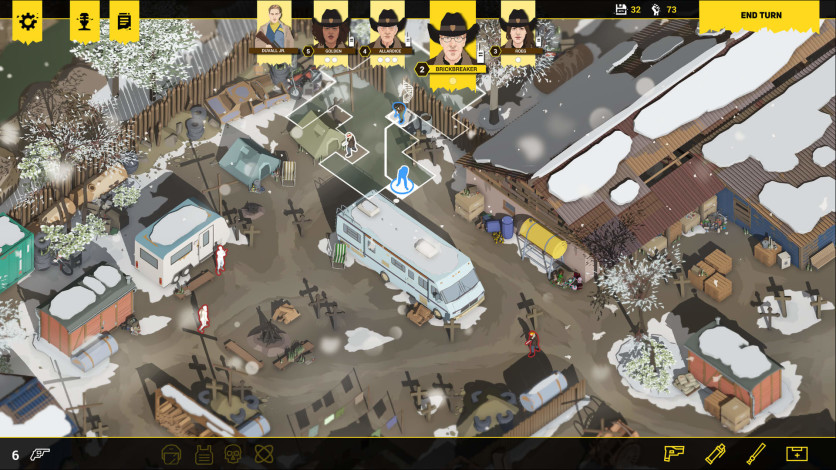 Rebel Cops is a spin-off game from This Is the Police, which exclusively focuses on the series' turned-based tactical operations. Lead a ragtag squad of cops in rebellion against their town's new criminal power to see how long you can hold out when you're constantly short on supplies and a single shot can cost a cop their life.

You’re not exactly the police, but you're the only ones on the side of justice → Viktor Zuev, a sadistic crime boss new on the scene, has quickly taken the town of Ripton by the throat. The community's leaders and local police have surrendered to his will. A master of intimidation and blackmail, Zuev has seized every major business in town, all of which he now controls as his own private fiefdom. An outlaw band of renegade cops refuses to bow, however. With little hope of success, they fight on — for justice, and the soul of their town.

Gunfights are thrilling, but stealth is key → You're fighting a guerilla war, out-manned and out-gunned. Use concealment and cover, approach the enemy quietly, and take them down before they can raise the alarm. You have at your disposal an arsenal of non-lethal weapons and equipment, as well as special tactical perks which you can unlock as you upgrade your rebels. True, sometimes violence seems inevitable, but when the time comes, don't hesitate: neither you nor the criminals have health bars. When someone is shot, they'll bleed out quickly, and getting a bullet in the head means instant death.

Explore, scavenge, and watch your back → Rebel Cops features not only compact operations where you need to fight for every inch of ground, but also large, open locations to explore — the sandbox levels. Search each room, crack open safes and vaults, try to get into inaccessible areas — and, above all, grab everything that looks useful. Stay together and proceed with caution, or accept the risks, fan-out, and try to explore every corner.

Take the high road, or the low road → Zuev's mercilessness is the key to his power. Can you defeat him without playing by his rules? Will you answer the needs of the desperate townspeople, even if it means putting the whole operation at risk? Will you spare civilian guards who are only doing their jobs? Some say that in war, you have to do whatever it takes to survive, but remember: reputation is more valuable than money. Bad blood on the streets can easily put your good name in the mud. Merchants will refuse to do business with you, and even some of your own people might turn their backs on you.

© 2019 THQ Nordic AB. Developed by Weappy Studio. Published & Distributed by THQ Nordic GmbH, Austria. All other brands, product names and logos are trademarks or registered trademarks of their respective owners. All rights reserved.