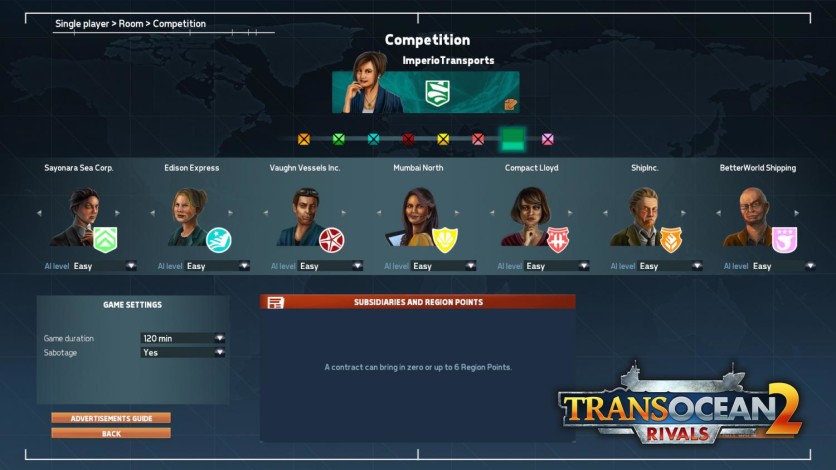 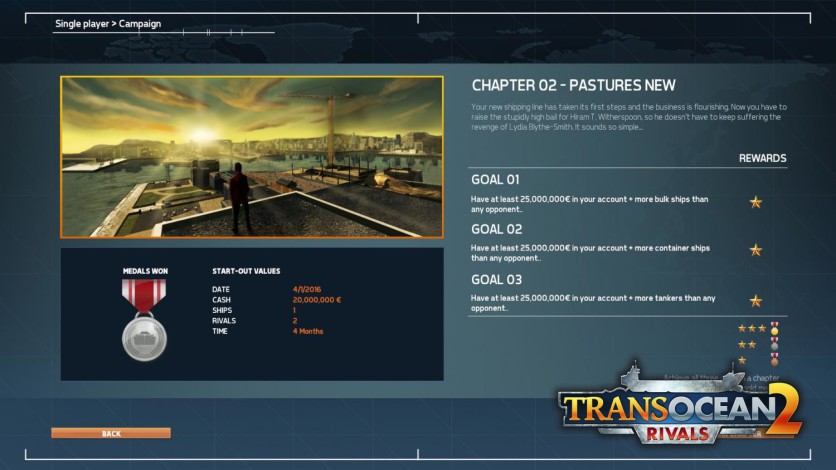 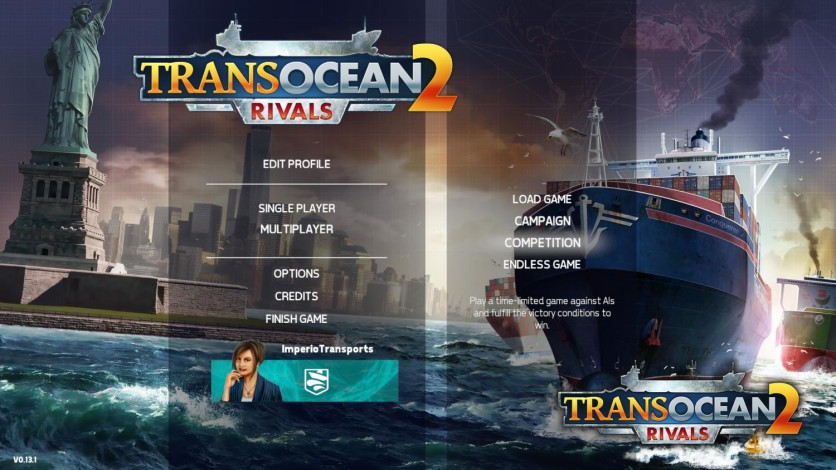 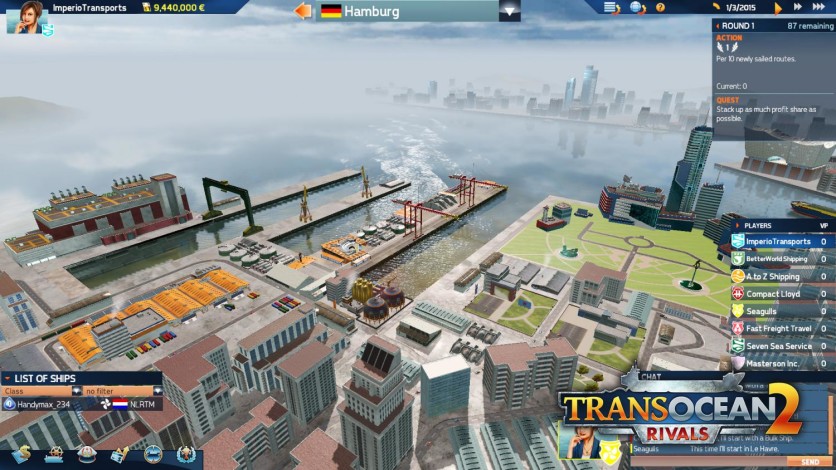 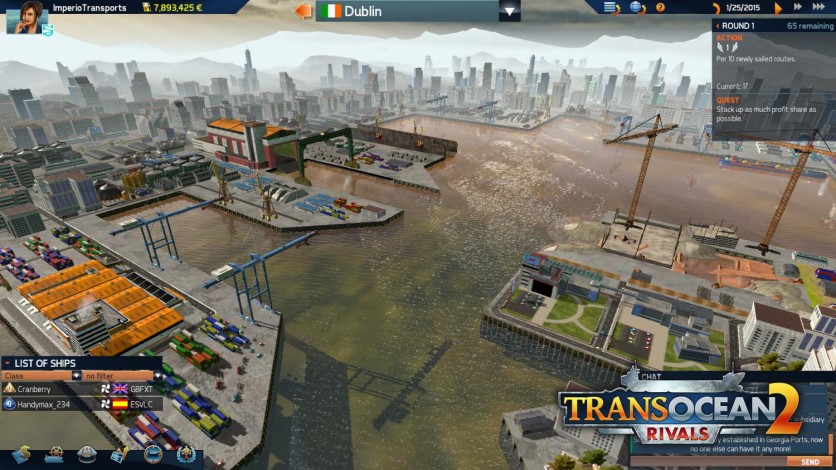 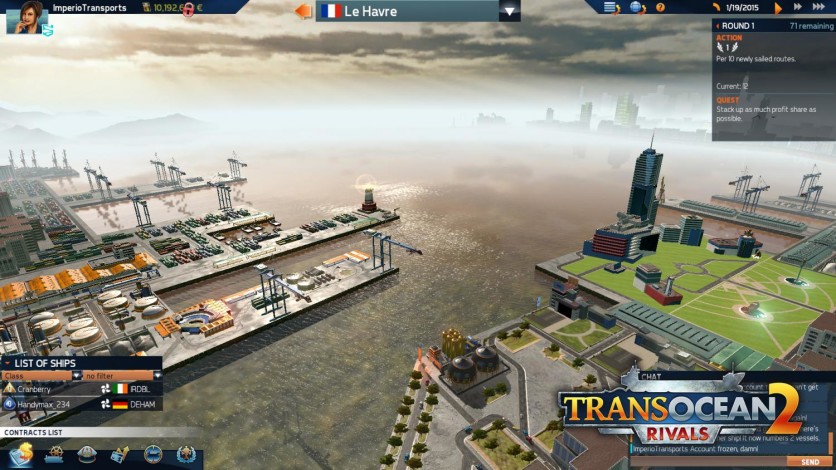 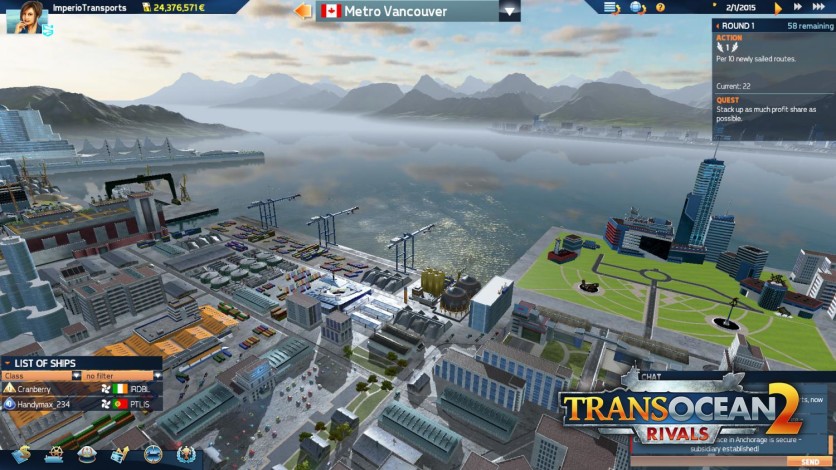 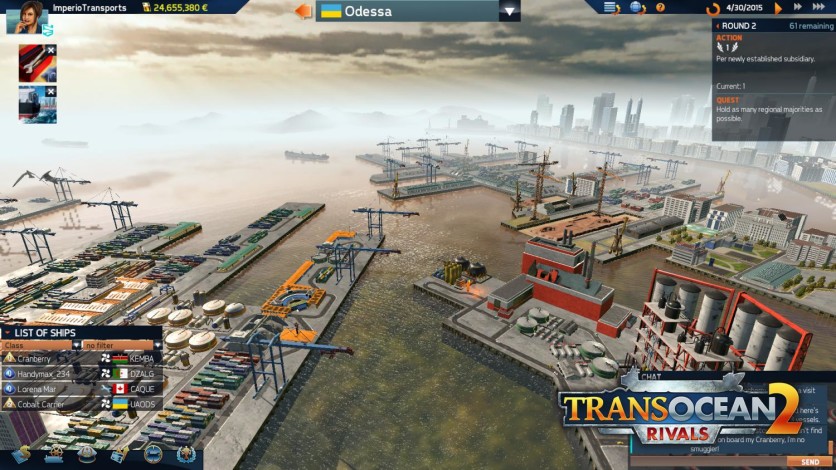 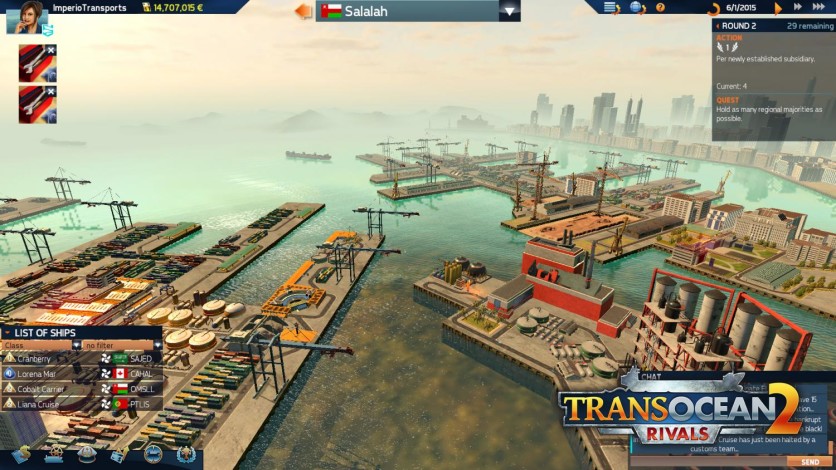 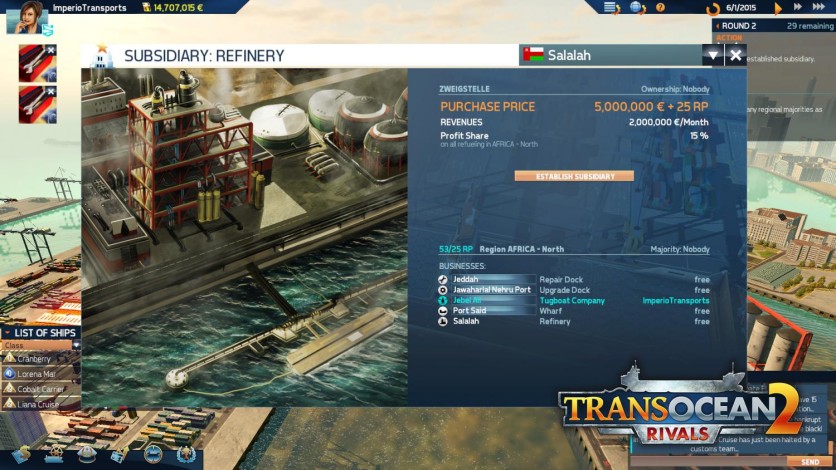 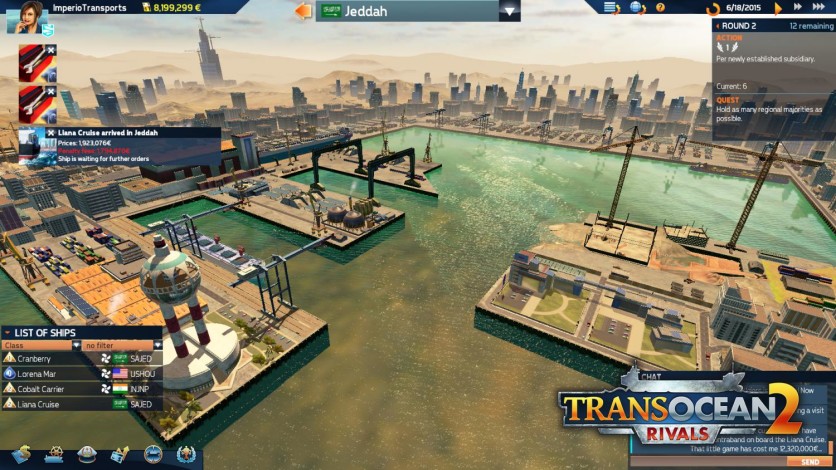 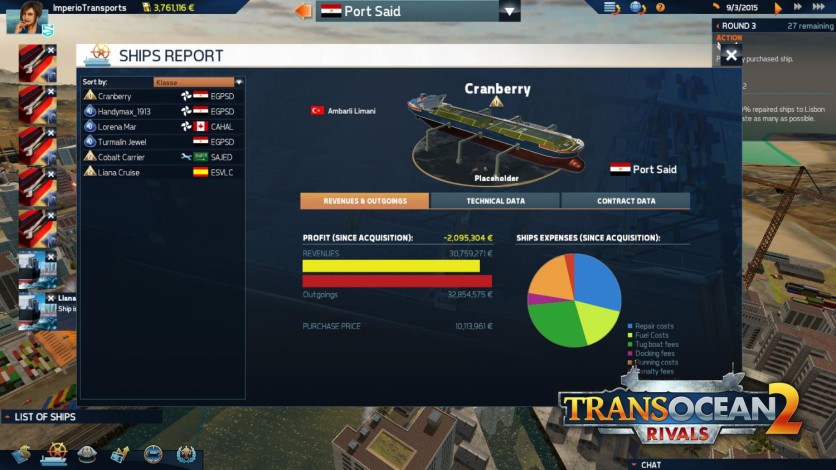 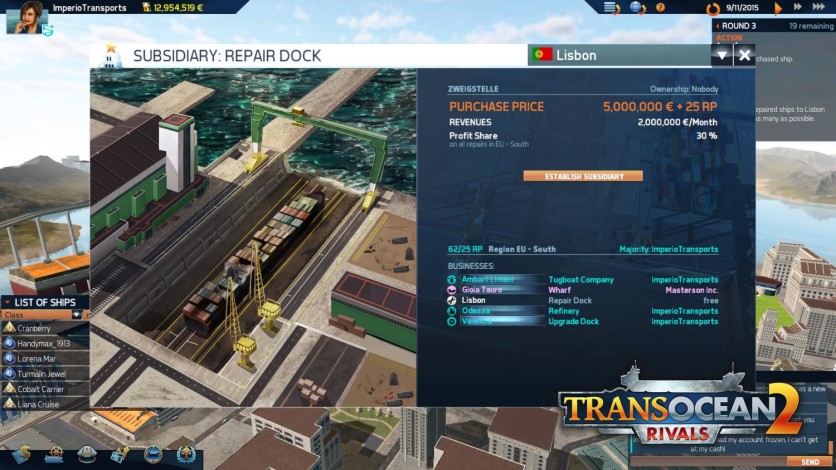 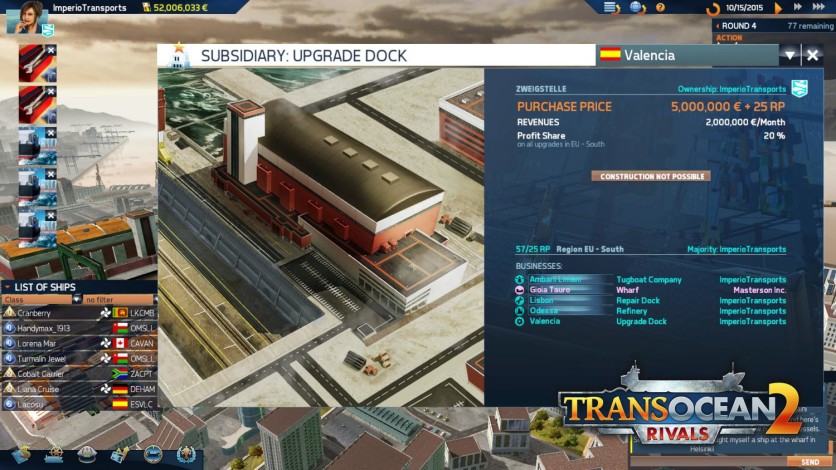 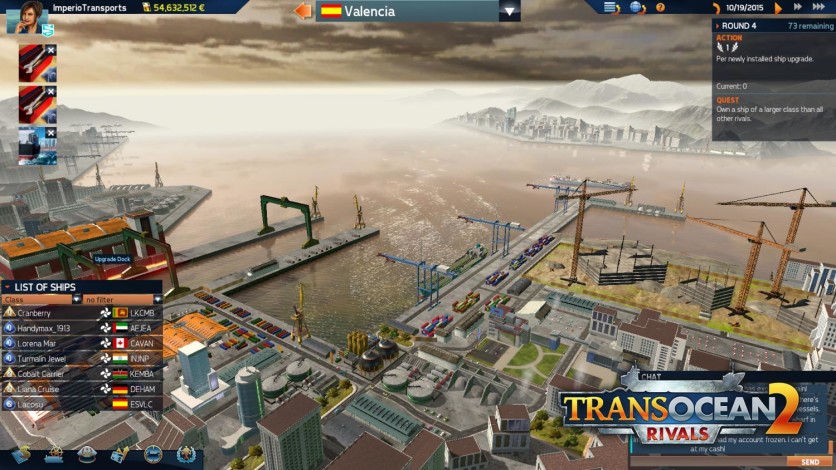 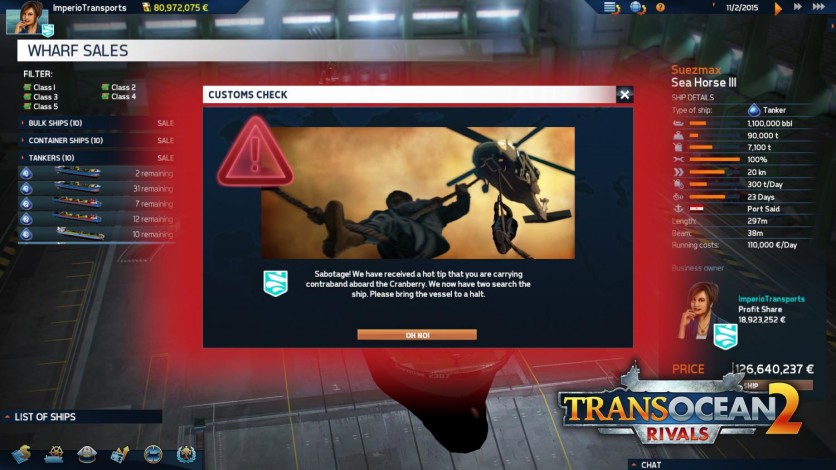 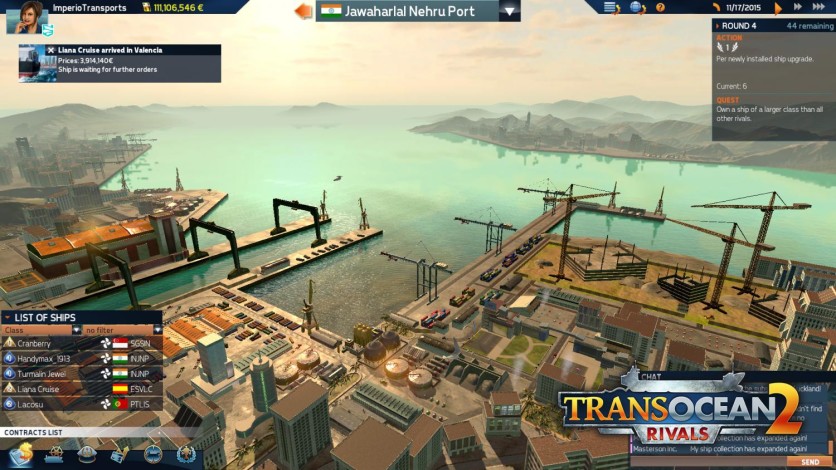 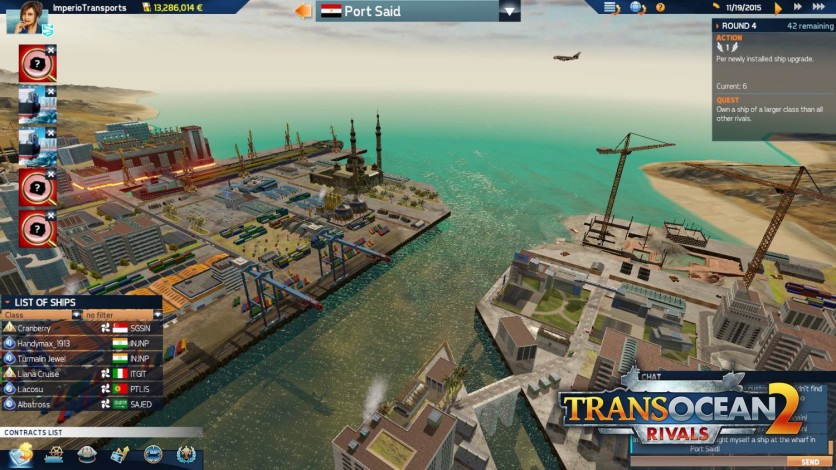 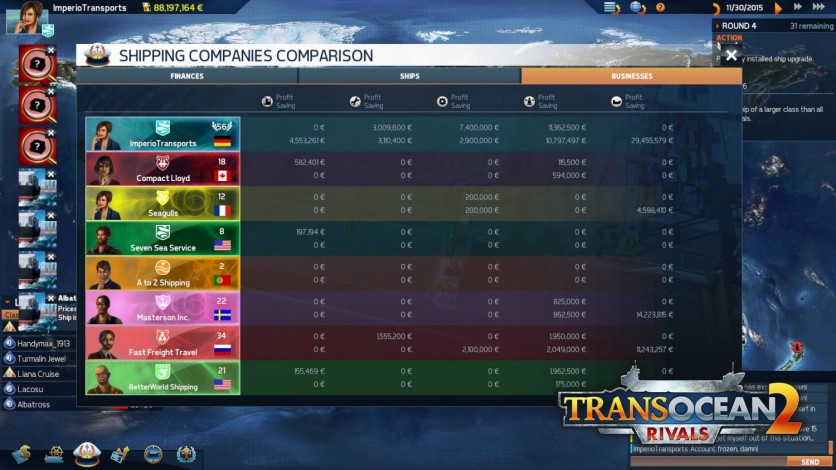 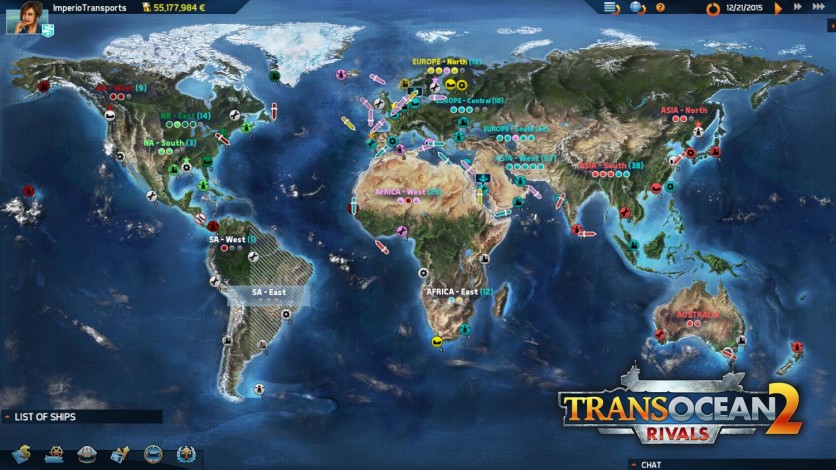 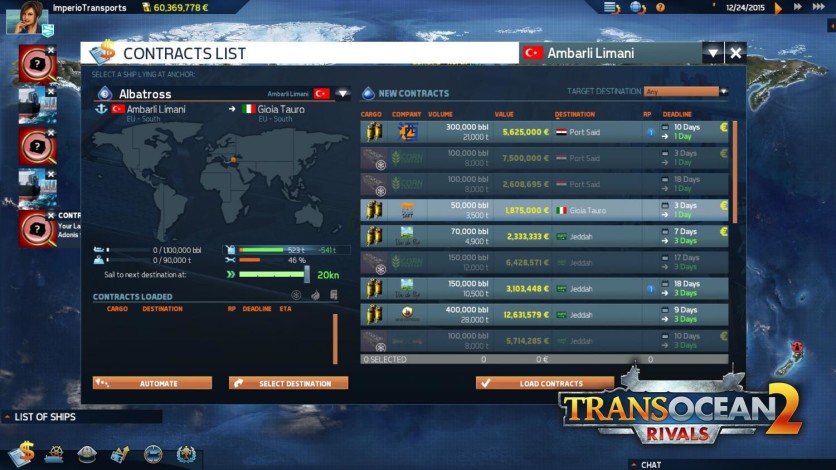 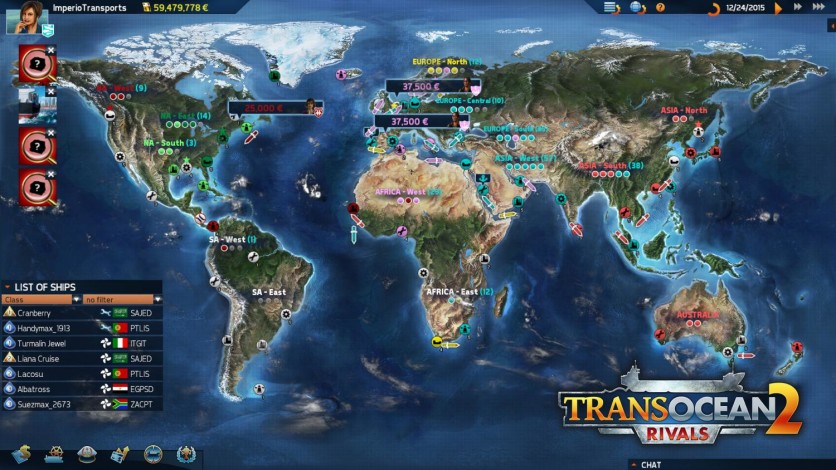 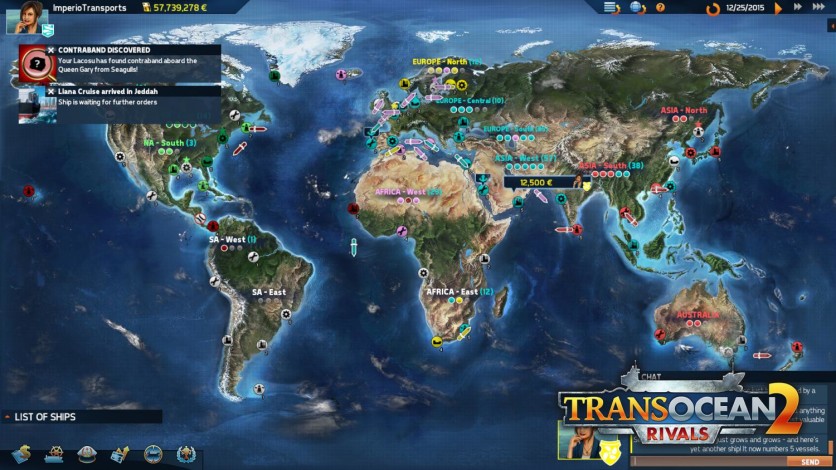 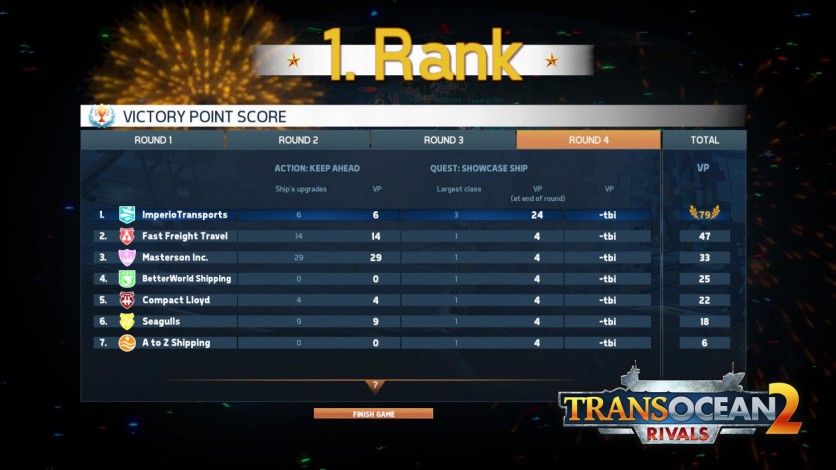 In TransOcean 2: Rivals you face a new challenge as the boss of your own shipping line: The international competition has gotten a lot tougher and the battle for the most lucrative contracts has only just begun. Will you succeed in sweeping your rivals from the seven seas and leading your shipping line to global success and renown?

The Game TransOcean 2: Rivals, the second chapter of the successful business simulation TransOcean, offers days of entertaining play either alone in its three single-player modes – Campaign, Endless Game and Competition - or with friends in a thrilling, competitive multiplayer mode. Get started with your newly founded shipping line in one of 60 ports and begin your career with a small fleet of worn-out old Feeders, the smallest type of ship in TransOcean 2: Rivals. Choose your port wisely and complete your first contracts to nearby ports in order to generate your first funds. Conduct your business with brains, plan your voyages with foresight and don’t underestimate external factors like the price of oil or your rival companies. This is how you will slowly expand your fleet and establish subsidiaries across the whole world.

Are you up to mastering all the challenges? A livelier economic system influencing all kinds of goods ensures that in TransOcean 2: Rivals you are also faced with macroeconomic challenges. With the three types of ships - Tankers, Container Ships and Bulk Carriers - you have even more options to specialize and take your company to the top. Challenge your rivals and develop your own global business enterprise. In the single-player mode, you can also give yourself a very unique challenge: Steer your ships directly in a variety of 3D environments when the tugboats go on strike and the going gets tough. Can you maneuver both small and large vessels undamaged through the harbor basin?

The Campaign: You already made it years ago. You paid off that hard-nosed investor and were the most successful shipping magnate on all the seven seas. But then something went wrong! Your shipping empire collapsed and what’s more - your old consultant and friend, Hiram T. Witherspoon, ended up behind bars. Now you’re living the life of a recluse as a dog sled pilot in Alaska. But your desire to help Hiram and put a stop to your adversary, Lydia Blythe-Smith’s, plans, drives you back to the world’s ports. Have you got what it takes to face down old and new competitors and become the successful shipping magnate you once were? Because only then can you put a halt to Lydia Blythe-Smith’s attacks once and for all.

Multiplayer Mode In multiplayer mode you play against up to 7 real opponents. And you’re going to need real strategic skill to stay ahead of the competition. With increasing pressure from your competitors, you will also see your opportunities increase: Battle for economic domination in the different regions or engage in sabotage activities to damage your competitors. But think carefully: Your rivals won’t just take that lying down. A single game is divided into several rounds in which you have to complete defined tasks in order to achieve Victory Points. The player who acquires the most Victory Points at the end of the game wins. Victory Point criteria are always randomly defined at the beginning of a game. You can manually set a game’s duration. This means there’s never an overriding optimum strategy and each game brings new challenges. While in one game you might receive Victory Points for making the most money, in another the reward will perhaps come from having the most modern ship. Will you rise up to all challenges and defeat your competitors?

TransOcean 2: Rivals, developed by Deck 13 Hamburg, is the sequel to the successful game, TransOcean: The Shipping Company, enormously popular with business strategy players, simulation fans and anyone who loves big cargo ships.